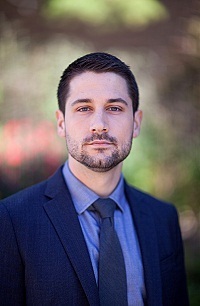 Christopher Weaver, a recipient of a Mellon summer stipend, is a Ph.D. candidate in the Department of Political Science, specializing in the study of American politics and constitutional studies.

His research and teaching interests encompass a range of topics within these fields, including the study of political behavior, constitutional law and jurisprudence, religion and politics, and identity politics. His dissertation examines the role of moral psychology in political decision-making, and his broader work examines the role of religion in the political lives of marginalized groups (including elites such as judges and party activists), exploring the ways in which religion both mitigates and exacerbates inequality across multiple dimensions, including race and ethnicity, class, and gender. His work has been published or is forthcoming in Politics and Religion and Law & Society Review.

In his dissertation, entitled " 'Knowing' Right from Wrong: The Role of Moral Confidence in Political Decision-Making," he examines individuals' moral judgments and legal opinions on the issues of abortion, homosexuality, capital punishment, and physician-assisted suicide. Using preexisting and original survey data, he contends that moral judgments and legal opinions on moral issues are distinct but related, and that variation in moral confidence, or an individual’s perceived level of moral knowledge, helps explain this morality-legality gap in opinion. Moreover, he argues that many individuals are morally overconfident, which drives them to more readily apply their moral judgments to policy issues and take more extreme legal stances on these moral issues. Leveraging data collected in an original survey experiment, however, he shows that this moral overconfidence can be reduced, resulting in greater support for legalization of these issues.

A first-generation college student born and raised in Arkansas, Chris earned his B.A. in Politics in 2011 from Hendrix College in Conway, Arkansas prior to coming to Notre Dame.