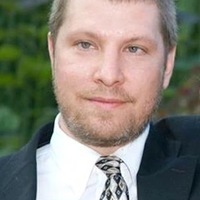 Robert Palermo, a recipient of a Mellon summer stipend, is a Ph.D. candidate in History. Mr. Palermo's research area is the intellectual history of Mexican state formation in the 1930s. He looks at it largely through the lens of political ideology and the Spanish Civil War. His primary advisor is Jaime Pensado, though he also works closely with Ted Beatty. As part of his research, Mr. Palermo has worked with the Taller de Gráfica Popular archive at Snite Museum and with the related material at the Institute For Latino Studies Samora Library with the help of Allert Brown-Gort and Tracy Grimm.

Prior to coming to Notre Dame, Mr. Palermo received his B.A. and M.A., both in history, at San Diego State University, where he worked with Elizabeth Cobbs-Hoffman. Before pursuing his doctorate, he also served in the U.S. Coast Guard and worked as a city of New Orleans paramedic.