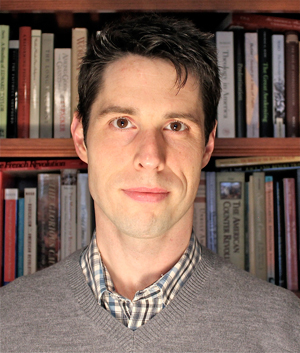 Joshua Kercsmar, a recipient of a Mellon summer stipend, is a Ph.D. candidate in U.S. History at the University of Notre Dame. His dissertation, “Animal Domestication and the Origins of American Slavery,” traces how British efforts to domesticate and raise five of the most prolific European animals–cows, sheep, pigs, horses, and dogs–served as a model for enslaving humans in America between 1550 and 1850. Moving between environmental and cultural history, he argues that whites conceived the enslavement of Indians and Africans as an outgrowth of their divine sanction to “improve” nature, to turn wild and unproductive beasts into tame and useful ones. This process was far from static. For as new, more rigorously mercantile, ways of relating to livestock took hold at the center of the British Empire during the eighteenth and early nineteenth centuries, they shaped and were shaped by changes in slave systems on the peripheries. The result of these mutual interactions was to transform the nature of human and animal servitude in profound and often tragic ways.

Josh has two articles in progress. The first explores how booksellers marketed the predictions of Ursula Shipton, an obscure English prophetess, to various London audiences between 1641 and 1700. The second argues for the ongoing influence of intellectual historian Perry Miller on studies of early New England. He has presented papers at numerous conferences throughout North America, including meetings of the American Historical Association, the American Society for Environmental History, and the American Society of Church History. He has taught in the fields of U.S. history and religious history, and developed courses on the rhetorics of environmental and urban sustainability.

In addition to holding a Lilly Graduate Fellowship for the Humanities, Josh has received research grants from the American Philosophical Society and Notre Dame’s Institute for Scholarship in the Liberal Arts. He is a 2013-2014 Graduate Teaching Fellow with the University Writing Program, and was a finalist for the 2013-2015 Barra Postdoctoral Fellowship at the University of Pennsylvania.