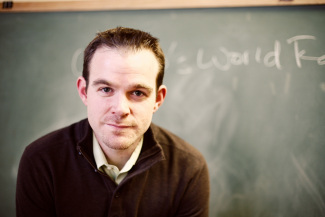 Professor Heath Carter, a recipient of a Mellon summer stipend while a doctoral student at the University of Notre Dame, joined the Valparaiso faculty in autumn 2012. A historian of the modern United States, he teaches a variety of courses, ranging from the history of Chicago to American religious history and beyond.

Professor Carter’s current research focuses on the complicated – and momentous – relationship between capitalism and Christianity in American history. He is particularly interested in questions about how and why American Christians came to be at peace with great economic inequality, as well as about the extent and limits of Christian resistance to capitalism. He is revising a book manuscript entitled Union Made: Working People and the Rise of Social Christianity in Chicago, which repositions ordinary workers as central actors in the emergence of the Social Gospel. In 2011 a chapter of this larger project, adapted for publication in the journal American Nineteenth Century History, won a national award for best article from the Working-Class Studies Association. Both the Charlotte W. Newcombe Foundation and the Andrew W. Mellon Foundation have contributed funding to his research.

Professor Carter earned his Ph.D. in History from the University of Notre Dame, his M.A. from the University of Chicago, and his B.A. from Georgetown University. He is married and has two young boys. In his spare time he enjoys reading; exploring new neighborhoods on foot or bike; dominating in Boggle; and making dinner for friends.